2023: I Am Totally Committed To Helping Buhari Finish Strong – Emefiele

“My focus at this time is a robust monetary policy and fighting inflation which is now a global problem; building a strong financial system in an increasingly uncertain global economy; Development finance and supporting farmers & manufacturers in our self-sufficiency and import substitution drive; raising N15 trillion for InfraCo infrastructure financing; “Building a world-class International Financial Center in Lagos; as we support the @MBuhari Administration to finish strong.” 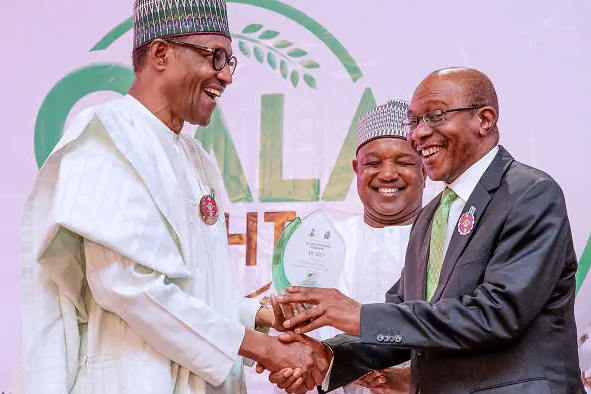 Mr. Godwin Emefiele, the Governor of the Central Bank of Nigeria, has reacted to the unrelenting calls for him to throw his hat in the ring for the upcoming presidential elections in 2023, stating that he is focused on strengthening the country’s economy.

In a series of tweets on his official Twitter handle @GodwinIEmefiele on Monday, the CBN Governor emphatically stated that he is presently fully committed to giving his total support towards ensuring that the administration of President Muhammadu Buhari finishes strong.

There has been a groundswell of various groups and individuals had been pushing for the CBN boss to contest for the 2023 election, citing his sterling performance against all odds, especially in development finance and helping to give a lifeline to the economy and taking bold initiatives alongside salutary interventions as reasons for their call on him to contest the presidential election.

The subtle campaigns and calls came to a climax at the weekend at the Eagles Square Convention ground of the All Progressives Congress (APC) in Abuja when various groups of youths across the country, in their hundreds, stormed the group in Emefiele’s branded apparel making a bold and audacious statement.

The CBN Governor however has affirmed that he is still laser-focused on his job as he tweeted on Monday: “My focus at this time is a robust monetary policy and fighting inflation which is now a global problem; building a strong financial system in an increasingly uncertain global economy; Development finance and supporting farmers & manufacturers in our self-sufficiency and import substitution drive; raising N15 trillion for InfraCo infrastructure financing; “Building a world-class International Financial Center in Lagos; as we support the @MBuhari Administration to finish strong.”

He also seemed to ask his teeming supporters to tone down their campaigns as he concluded with the hashtag” #NoDistractions.

However, even without openly declaring his intention to run for the office, Mr. Godwin Emefiele seems to be one of the strongest contenders for the coveted Presidential seat in 2023.

It is no surprise, therefore that the Peoples Democratic Party (PDP) has called for the Central Bank Governor, Godwin Emefiele to resign over his perceived 2023 presidential ambition. Several Emefiele support groups have however responded that their preferred candidate had not violated any laws.The groups namely, Nigerian Patriotic Quest; Emefiele Support Group (ESG); and Unified Northern Nigeria Youth Forum in separate statements, dismissed PDP’s claims.

According to a statement by the director of communications in ESG, Benigna Ejimba, told the PDP that a poster of the CBN Governor and the President does not amount to a breach of the aforementioned section of the law.

She said “Even when the CBN Governor is yet to answer the call and declare for 2023 Presidency. It is quite interesting that a mere poster is generating so much noise from the opposition.

“This indeed confirms to us that we are on the right path. As members of the Emefiele Support Group, we made our choice to ask for his Presidency because, in him, we see a man who has shown passion and commitment to our country’s development,” he said.

On his part, co-ordinator of Nigerian Patriotic Quest, Ahmed Ja’Usman Tijani, said as a prominent campaigner for Emefiele to be part of the presidential contest come 2023, they owe no one any apology for affirming that Emefiele is the type of leader that the nation needs now.

He said, “We are, indeed, surprised that a National Publicity Secretary of PDP will at this time believe that running down Emefiele is the best way to re-energise their ineffective opposition politics of the past 7 years.