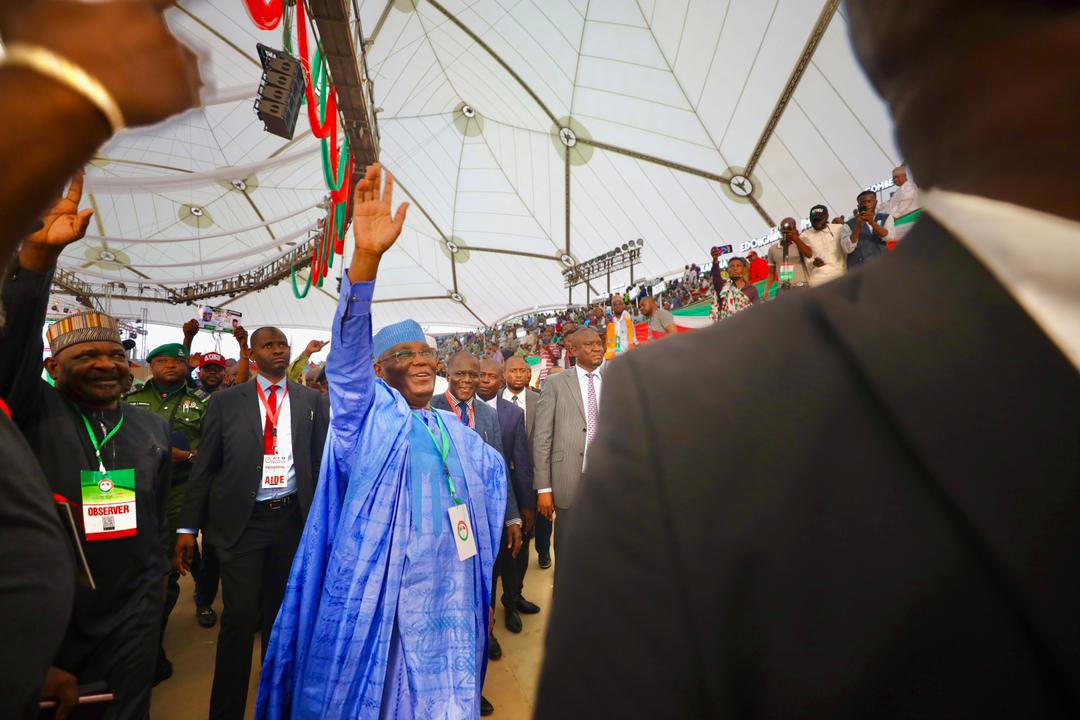 Sen. David Mark, the Chairman and Chief Retuning Officer of the PDP Special Convention, announcing the results, said total number of accredited delegates was 767, the total number of votes cast was 763, while 13 were invalid votes.

Mark said that “Abubakar having scored the highest votes in the election is hereby declared the winner”.

He also announced the votes scored by other aspirants as Gov. Udom Emmanuel of Akwa-Ibom – 38 votes, and Gov. Bala Mohammed of Bauchi State – 20 votes.

Former President of the Senate, Sen. Bukola Saraki – 70 votes; and former Secretary to the Government of the Federation, Sen. Anyim Pius Anyim – 14 votes.

The only female Aspirant, Mrs Tari Oliver, and the former President of the Pharmaceutical Society of Nigeria, Mazi Samuel Ohuabunwa scored one vote each.

The former governor Peter Obi of Anambra had earlier withdrawn from the race and resigned from the party.

Others that withdrew from the race were financial expert, Mohammed Hayatudeen, Gov. Aminu Tambuwal of Sokoto State and Dr Nwachukwu Anakwenze.

Atiku Abubakar born on Nov. 25, 1946 in Jada, Adamawa, ran for governor of the state three times in 1990, 1997 and 1998, when he was elected before becoming the running mate to former President Olusegun Obasanjo in 1999, of which he remained the vice president till 2003.

Abubakar contested for the office of the president several times, including 2014, when he ran on the platform of the All Progressives Congress (APC) and lost at the primaries to incumbent President Muhammadu Buhari.

He also ran as the PDP presidential candidate in 2019, but lost president Buhari of APC.

In his acceptance speech. the Presidential Candidate of the Peoples Democratic Party (PDP) for 2023 election, Atiku Abubakar urged his fellow contestants in the primary election to work with him for the victory of the party.

He described the primary election that produced him freest and a well-fought election, pledging to work with the co-aspirants and give them sense of belonging, if elected.

“Let me also use this opportunity to call on my fellow contestants and to assure them that I am ready to cooperate and work with them and give them a sense of belonging in this party and our next government.

“Therefore, my fellow compatriots, I want to appreciate your efforts in deepening our democratic processes in this party. It was a well fought primary election.

“ So, I commend you for that and I look forward to working with you very closely. So that together we can build this party to a level where we can take over the government,” Abubakar said.

He also appealed to aggrieved party members to return to the PDP, pledging that their grievances would be addressed.

Abubakar described the exercise as the freest election conducted by the party, saying the outcome remains historical in bringing fundamental changes to governance and democracy.

“Today, we are making another history. The history, which we believe will bring about fundamental changes in governance and also in our political processes.

“Today, we have witnessed another one of the freest elections to be conducted by our great party.

“Today marks another milestone in the process of our democratic gains,” he said

The former vice president reiterated his pledge to unify the country as well as deal with its economic and security challenges.

He recalled that in his declaration he referred to himself as a unifier and pledged to unify the country.

“I am going to deal decisively with our security challenges in this country. I also pledge to confront our economic challenges, which were caused by the APC government.

“The PDP made Nigeria one of the most prosperous countries on the African continent.

“We implemented economic reforms that brought about jobs, and prosperity in this country,” the gains according to him had been wiped out, pledging to return them.