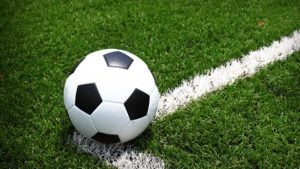 No fewer than 20 teams will slug it out beginning from Wednesday as the 2022 All Financial Institutions Football Competition (AFIFC), sponsored by the Central Bank of Nigeria (CBN), gets underway.

A statement by the Director Corporate Communications Department, CBN, Osita Nwanisobi, disclosed that the competition, which would start with preliminary matches, would be played in Kano and Akure.

Nwanisiobi said the participating teams, comprised of regulators, deposit money banks, and other financial institutions, would play each other in two groups of 10 each.

He said the quarter-final matches would also hold in Kano and Akure on Saturday, while the semi-finals would hold on Dec. 6 in Bauchi.

“The finals of the competition will be decided at the Pantami Township Stadium, Gombe, Gombe State, on Dec. 10,” he said.

According to Nwanisiobi, the competition, which Nigeria Football Federation (NFF) is a partner, is in its 35th edition, and will see the winning team pocketing N2million naira.

He said the runners-up would go home with N1.5 million, while the third place winner would receive N1 milliion as fourth-placed team pocket N500,000.

“The CBN and the NFF have concluded plans to have Mr Garba Lawal, a former Nigerian International, as Special Guest at the finals.

“This is to serve as a significant boost for participating teams.

“The CBN urges all the registered teams to participate actively and exhibit an unrelenting spirit of sportsmanship.”

Nwanisiobi said that the CBN remained committed to making positive contributions to the promotion and development of football by sponsoring the competition annually, which is in line with the bank’s Corporate Social Responsibility.