1000 inmates freed as in Oyo, as Gunmen attack Abolongo prison

It is reported that the gunmen arrived in their numbers around 10 O'clock last night and started shooting heavily leading to the release of the inmates who fled in various directions. 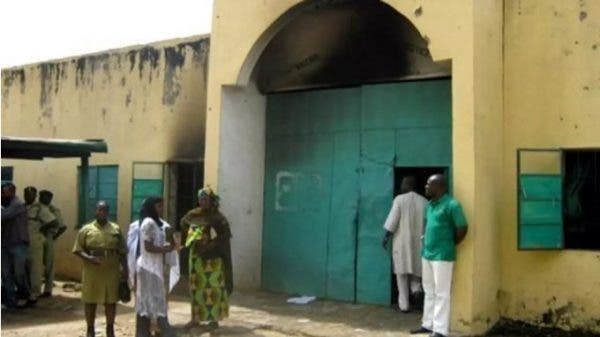 Over a thousand prisoners have reportedly escaped from the Abolongo prison in Oyo town after some gunmen attacked the correctional centre and freed all inmates on Friday night.

It is reported that the gunmen arrived in their numbers around 10 O’clock last night and started shooting heavily leading to the release of the inmates who fled in various directions.

The Oyo state police command is yet to release an official statement to ascertain the actual number of the escapees.

Nigeria Correctional Service, Oyo State command has however commenced a manhunt for the fleeing inmates

Speaking to Radio Nigeria on the development, the Public Relations Officer of the Command in Oyo State, Mr. Anjorin Olanrewaju said the service is collaborating with sister agencies and local security networks to nab the fleeing inmates.

Mr. Olanrewaju explained that the State Controller of the Service, Mr. Tosin Akinrinjomu has paid a visit to Abolongo Prison in Oyo town to ascertain the level of damage done by the gunmen.

He enjoined the residents in and around the environment to report any suspicious movement or trace of the escaped inmates to the nearest security agencies.

Mr. Olarewaju explained further that the command will do all its best to arrest the fleeing inmates and bring them back to the facility at Abolongo. He gave an assurance that the command would do everything possible to prevent its re-occurrence.

Meanwhile, the Commandant of the Oyo State Security Network Agency (Amotekun Corps), Retired Colonel Olayinka Olayanju said one of his officers died in the process, while three others sustained injuries.

According to Retired Colonel Olayanju, a female Corps of the network is in critical condition at University College Hospital, Ibadan. UCH.

Bad news for CBT centres as jamb stops them from collecting…