The UN refugee agency said that protracted conflict in places like Ethiopia and Democratic Republic of Congo were other factors behind the high numbers. 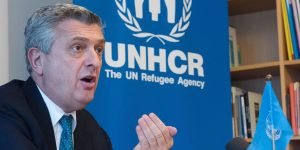 The UN High Commissioner for Refugees (UNHCR) on Sunday said no fewer than 100 million people had been displaced worldwide.

According to UNHCR, the Ukraine war and other conflicts pushed the number of people forced to flee conflict, violence, human rights violations and persecution over the staggering milestone of 100 million for the first time on record.

The UN refugee agency said that protracted conflict in places like Ethiopia and Democratic Republic of Congo were other factors behind the high numbers.

“It’s a record that should never have been set,” UN High Commissioner for Refugees, Filippo Grandi, said in a statement.

“This must serve as a wake-up call to resolve and prevent destructive conflicts, end persecution, and address the underlying causes that force innocent people to flee their homes.”

The UNHCR data includes refugees, asylum seekers and those displaced within their own countries.

Last week, the International Organisation for Migration (IMO) informed that a record 59.1 million people were displaced within their homelands last year, four million more than in 2020.

Conflict and violence triggered 14.4 million internal displacements in 2021, nearly 50 per cent increase over the previous year.

Meanwhile, weather-related events such as floods, storms and cyclones resulted in some 23.7 million internal displacements in 2021, mainly in the Asia-Pacific region.

Grandi urged action to address the causes of displacement, saying humanitarian aid is only treating the consequences.

“To reverse this trend, the only answer is peace and stability so that innocent people are not forced to gamble between acute danger at home or precarious flight and exile,” he said.