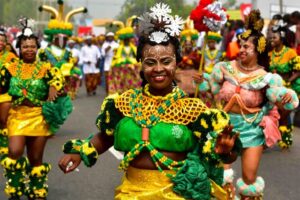 No fewer than 10 countries are expected to participate in the 2022 Annual Calabar Carnival, Mr Eric Anderson, Commissioner for Culture and Tourism Development, Cross River has said.

Anderson made this known in an interview with the News Agency of Nigeria (NAN) on Tuesday in Abuja.

He said that after a two-year break caused by the coronavirus pandemic, the carnival is set to be staged from Dec. 1 to Dec. 31, 2022.

The commissioner also said that si far, 20 states of the federation have indicated interest to participate in the carnival.

“For two years, there was a global issue that did not allow events across International lines to take place and for us we are resuming as most big events around the world had their carnival a few month ago.

“Cross River is Nigeria’s tourism destination, so we are ready with exciting events from Dec. 1 to Dec. 31.

“For the last two years we did not hold the carnival, we had to sit back and review and look at ways to up the game.

“One of the aspect we realised is that we had a lot of people that want to be revellers in our carnival bands and so the size increased.

“So we had to create two more bands from the five bands we had to make it seven, so for this year we will be having seven bands to be competing,” he said.

The commissioner added that adequate security measures had been put in place to ensure the protection of lives of participants and visitors coming to the state.

“I can tell you for a fact that we have proper security on ground, I say this on very good authority because I am also part of the team that went round on courtesy call to all the security heads in Cross River.

“On our first dry run which held in October, we had all the heads of those arms participating in it and they have given their full committment.

“Though we have pockets of insecurity issues around the country, but we will try our best to secure the state, the event venues, our routes and our people as much as we can,” he added.

NAN reports that the carnival is a fairly new addition to the annual festival calendar of Nigeria, since it first began in 2006, although it’s now held annually and is dubbed “Nigeria’s largest street party.”

The carnival holds every December and was declared by the then governor of Cross River, Mr Donald Duke as an activity to mark Christmas celebration yearly.

The quality of the festival has grown over the years making it Nigeria’s biggest carnival and an internationally recognized festival.